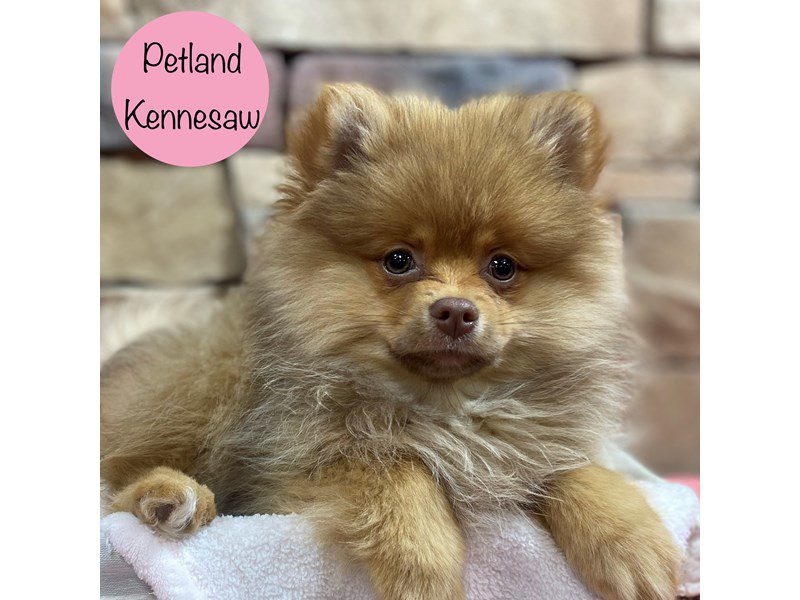 Want more information on this Pomeranian? Please fill out our Pet Inquiry form below. The Pomeranian, also called the ‘Pom’, is a famous Spitz dog named after the Pomerania region in Europe. Their cute size, sturdiness and lively nature make them one of the most popular dogs in the United States and Britain. Petland is honored to offer the highest quality Pomeranian puppies who will be an instant fit on your lap and in your family.

The Pomeranian is the smallest dog of the spitz family of dogs. They are able to be traced back as a descendant of actual sled dogs from Lapland and Iceland. They get their name from areas in Poland and Germany, which is where they were originally bred. In the 1800s, after Queen Victoria of England praised these dogs, their popularity took off and never slowed down since. In 1888 they were officially recognized by the American Kennel Club. They remain a top dog today in the United States.

Many would describe their Pomeranians as fearless, loving, loyal, and caring. Despite this breed being a very small dog, they do not back down from anyone or anything. They have tiny bodies but huge loving hearts. For generations, this breed has topped the charts of popular dogs and remains a top breed in the United States. Their temperament is best described as happy, warm, and sometimes a bit stubborn.

The Pomeranian comes in more colors than most dogs. Thirteen to be exact, which range from light-colored cream to honeycomb to red to chocolate to black, as well as some with different variations and blends. With a soft and very fluffy coat, it is wise to take the time to brush and comb his fur routinely. Starting with slow and short strokes tends to free any knots this dog may have. The more often brushing takes place, the easier the process becomes. Keeping up with your dog’s grooming needs is a very important aspect of his care. It is also recommended that routine nail clipping and teeth cleaning are conducted, as well as a weekly bath.

Feeding your puppy quality dog food in the right amounts is crucial. Pomeranians that are still growing should eat about one and a quarter cups of food in a 24-hour period. Mature Pomeranians should be fed one-half cups of food per pound of their body weight in a 24-hour period. Most would recommend that the food is divided into two portions and served about twelve hours apart. This breed does not require an excessive amount of care, however, basic care will make this dog look and feel his best.

Fact: The Pomeranian is a tiny dog that weighs less than fifteen pounds yet originates from a line of very large, strong, and physical dogs.

Fact: The Pomeranian has been spotted with some very famous people. These people include Mozart, Dr. Martin Luther King Jr., and Michelangelo, who allowed his Pomeranian to watch as he painted the ceiling of the Sistine Chapel!

Fact: This breed is known to be very loyal to his family, especially children.

Pomeranian's who found a loving home